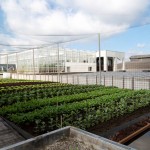 The Ferme Abattoir is the first large realization of BIGH. It stretches out over a surface of 4,000 m2, consisting of 2,000 m2 of greenhouses for horticulture and aquaculture and a 2,000 m2 outdoor vegetable garden. It is situated on the rooftop of the popular Foodmet market hall in Anderlecht (one of the Brussels municipalities), which attracts 100,000 visitors over three days each week.

Developing the Ferme Abattoir took almost two years with construction starting in 2016, outdoor garden tests in 2017, and the greenhouse and fish farm completed in 2018. Full operation of the farm will be reached at the end of 2018.

Not only did Agaris develop rooftop substrates specifically for the project, its organic Grow Bags are also being used in the greenhouse for the cultivation of tomatoes. They contain natural raw materials that increase the yield, improve resistance to plant diseases and provide a tastier produce. After usage, the substrates can be composted, allowing BIGH to fully close the cycle at the farm.

“In recent years, we have invested heavily in the development of substrates for urban farming. We are proud of our partnership in this project, which will contribute to a more sustainable urban environment, while promoting a healthier lifestyle,” explains Stefaan Vandaele, CEO of Agaris.